Gone for a walk

Gone for a walk
Lycian Way

Back in October
Posted by Northampton Open Spaces at 20:59 No comments:

Delapre Estate – a work in progress

The preservation of Delapre Abbey, park and gardens for the benefit of the town is a story of hard work and persistence by a number of dedicated people, who in 2001, responding to the threat of the Abbey being sold to a developer, came together to protest and then form Friends of Delapre Abbey – FoDA.
Restored is a word that crops up continually when talking about Delapre, 10 years of work has seen vast improvements in the site. The water garden is currently being restored, the Victorian greenhouses are part way through their restoration and funds are being sort for restoring the Grade II* listed building.
With 190 acres (77 hectares) of grounds, Delapre Estate is the largest park in town providing a mixture of settings from formal gardens to open parklands that is often used for events, water features (again under-going restoration) and shrubbery fill in the gaps.
The area is also the site of the Battle of Northampton when in the afternoon of 10 July 1460 a Yorkist army under the Earl of Warwick attacked the defensive encampment of the King's army on the southern side of Northampton. King Henry was captured and a number of the leading Lancastrian noblemen were killed.
Take a walk through the Charter Wood to the east of the house and you will reach Delapre Lake used by Northampton Water Ski Club with a public footpath to the north and a less formed return path to the south. A walk leaflet for the area can be downloaded from the Northamptonshire County Council web site. 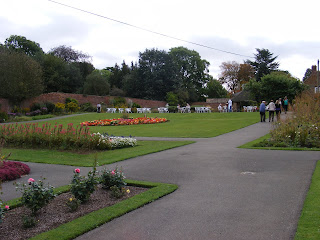 When you have finished exploring the park there is the tea room in the Victorian walled garden, where on a sunny day you can sit out and enjoy the flowers and statues, or if you need to sit inside then browse the second hand book shelves.
There is still much to do, if you would like to help then go to their excellent web site - where there is also further information on the estate.
Posted by Northampton Open Spaces at 12:49 No comments:

Barns Meadow and Becks Meadow Nature Reserves, managed by the Wildlife Trust,  laying beside the Nene on the east side of town had become infested with ragwort in recent years. The yellow flowering plant which is often seen on waste ground and along roadways is poisonous to livestock, though it has been some years since it killed any there have been cases of sickness.
While the plant is growing it doesn’t present too much danger as it has a bitter taste, though the cattle seem to keep trying it just to make sure! But when the plant has been cut and died off it loses its bitterness and animals will eat it.
Cutting and removing ragwort is no help as it will only return. There are only two options – spray it or pull it out, including the roots. These being nature reserves and already being grazed by cattle the first option couldn’t be used so it had to be hand pulling, which is where volunteers come in useful!
By hand and with homemade heavy duty weed pullers the team spent over 120 hours during the summer removing the ragwort and returning at interval to deal with any that came through late.
‘Unfortunately this will not be the last year of hard work’, said the volunteer warden for the meadow, ‘ragwort is a biennial plant, taking two years to flower and we’ve only removed this year’s flowering plants. But we hope that we have prevented any of them setting seed so we will see the benefit in two years time. Next year will probably need the same amount of work again’.
Volunteering with the Wildlife Trust is not all weed pulling, see their programme leaflet for how you can enjoy a day in the outdoors as well as keep fit.
Posted by Northampton Open Spaces at 09:59 No comments:

Is the National Trust being hysterical?

Who do you think should determine what local need are, the people who live there or those that just visit?
At present the National Trust and others are waging a campaign against the governments ‘National Planning Policy Framework’ (NPPF), they seem to think that it will allow developers to take advantage of naive country folk and build new housing estates all over their green fields.  From what I’ve seen of reactions to proposals for incinerator, wind farms etc they are quite capable of protecting their neighbourhood.
That’s not to say that the NPPF is perfect, whilst Greenbelt, and Areas of Outstanding Natural Beauty are specifically mentioned in the plan, agricultural land isn’t and if a community doesn’t have a clear development plan then there is a presumption that development will be allowed. But should the plan be opposed because some local authorities have been lax in drawing up a development plan? Surely what should happen is that the presumption to develop should not come into force for a period of time that allows local authorities to complete their plans.
Northampton, jointly with Daventry and Towcester have put together a Local Development Scheme, which would seem to meet the requirements, though I’m no expert. However, what seems less certain is whether local authority plans will over-ride those of local communities. Even Wootton & East Hunsbury Parish Council, which is a front runner in local democracy, is not sure how much the views of its residents, as express through a Neighbourhood Plan, will be heeded.
The village where I grew up was strangled by a boundary outside which no building was allowed. With houses only being built on spaces within the village such as large gardens and farm yards the density increased spoiling the former character. And still there were not the homes that young people could afford to remain in the village. Giving a community the ability to decide what’s best for itself could have solved these problems.
There would seem to be much to iron out in the NPPF, however the National Trust appears to be taking the stance of shout first and talk later. The consultation on the draft plan has only part way through and I’m sure the NT and others can make a valuable contribution to the final plan, but banging the table is not going to get a sympathetic hearing. Depicting a Los Angeles sprawl as what could happen to our countryside is not helpful.  Let’s hear what the NT proposes as alternatives are rather than their hysteria.
Links
NPPFConsultation web site
Northampton Plan
Wooton & EastHunsbury PC Chairmans interview
National Trust Petition
Royal Town Planning Institute
Posted by Northampton Open Spaces at 09:49 No comments:

It had been quite a few years since I was last in Thornton Park and my memory of the whole was probably coloured by the dilapidated state of Kingsthorpe Hall, occupying just one small corner at the north east end, part of which was used as a community centre. 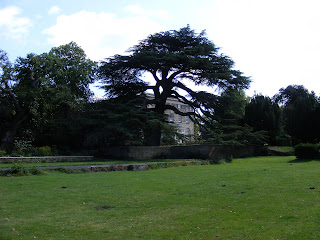 However, this is now all changed.

The Hall, a Grade II* listed building, which was damaged by fire in 2002 was still on the English Heritage ‘at risk’ register in 2009. Refurbishment of the Hall together with adjacent buildings has now taken place and a new community centre, has also been built.
The park in now well maintained with large areas of grass and many mature trees offering  good shading when needed.  Two modern play areas can be found, one near the Hall and the other at the western side of the park. 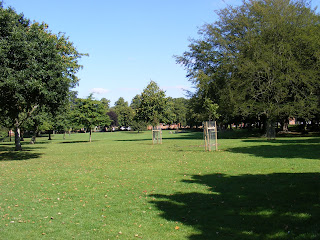 The park forms one extremity of an extensive green corridor along the Brampton Arm of the River Nene. Cross the path at the western end of Thornton Park and you will enter Kingsthorpe Meadows leading out to the north of the town and linking in with the Brampton Valley Way.
In 2009 a Friends of Thornton Park group was formed. The group has carried out extensive research into the history of the park and drew up detailed management plan for its long term maintenance.
Now with people to care for it the parks future as a place for families is assured.
Posted by Northampton Open Spaces at 08:22 No comments:

In today’s Chronicle & Echo we hear of the £300,000 spent by the Borough Council in clearing up fly-tipping in the last financial year. Three things surprised me:-
The fine needs to be considerably higher. The law allows courts to make an order requiring the offender to pay for the costs associated with the enforcement and investigation of the case, the seizure of any vehicles that were involved in the offence and costs for the removal of the illegally deposited waste. The court may also make an order to deprive the offender of his rights to a vehicle (and its contents) if the court is satisfied that the vehicle was used to commit the offence.

Why isn’t this being applied? 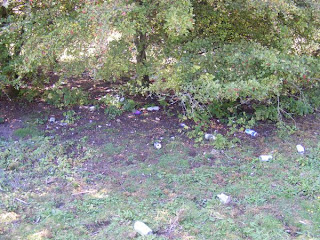 Littering needs to be attacked through education, which is appropriate because one one the main areas of littering is around upper school
It is impossible to control littering by legal action, there’s just too much of it and as is seen with fly-tipping is mostly ineffectual. Only education can reduce littering, which would be appropriate as a good proportion of it takes place around our upper schools.
As a first step should schools and businesses, particularly those providing food, be made responsible for keeping the areas in their vicinity free from litter? For new businesses this could be done through planning approval. After all it is mostly their pupils or customers that are causing it. Next provide more litter bins which are emptied regularly. And finally bring back deposits on drink bottles and cans.
Posted by Northampton Open Spaces at 20:41 No comments: